I Guess I'll Chime In (Gifts vs Fruits)

- February 25, 2011
Ever Give someone a Fruit basket? I think God does.
I am sure that you will get a ton of info from me these next two weeks about what happened at M11 Conference. Some of it will be very personal and some will be much more theological. Tonight however I am going to say what I should have been able to say on Tuesday night during the discussion. I remained silent the entire conversation listening to Students and Faculty from Nazarene Universities discuss. I did not feel comfortable saying anything because I had not seen the sermon yet. I have seen it since then. I recorded much of the conversation and listened to it before I wrote this article so that it would be fresh in my mind. Here is the Speaker and the Bio provided by M11 Conference:

Dan Bohi is a lay person on whom a very special call to ministry has come to his life.  Dan says, "October 10, 2008 changed everything in my world. God's presence and direction confirmed a calling for my life. That call was to go wherever I am invited with a message that God wants his church to be free, pure, and filled with power." Since that time, Dan Bohi has spoken in 169 churches. He has been asked to speak on 39 districts in the Church of the Nazarene. In the last 21 months, Dan has received over 550 calls to speak. If you ask him what is happening, he simply says, "I don't know…all I know is that God is doing something that is far beyond my ability to describe."
As a speaker, Dan is unlike most. He reads the Bible through every 30 days and is able to quote much of it. He weaves the Scriptures together in a pattern that brings life changing news to people seeking more from life.
Over time, the church world has used a term like "anointing" with such imprecision and diversity, that it has lost its meaning for many. One encounter with Dan's ministry and the original meaning behind that term is recovered.
Dan Bohi will speak Tuesday morning, February 22, 2011 at M11 in the Kentucky International Convention Center, Louisville, KY.

Yes Dan did something that some Nazarenes wouldn't dare to do. He preached on the Signs/Gifts of the Holy Spirit. For a long time in the church I experienced lives being healed and tons of people praying for physical healing! I also remember learning as a teenager that we just don't talk about the gifts side. I was actually dating a pentecostal girl while attending a Nazarene church. One of the questions that burned in my mind was: Why do they pray in tongues but, Nazarenes don't?
I was mainly told we just interpret the bible differently and many other non confrontational ways of getting me out of someones office without offending me. So when Dan got up and preached on the Gifts of the holy spirit, he didn't talk much at all about this gift. It seemed like what he wanted to talk mostly about was a renewing of our spirit, "the churches" spirit, and Healing! He thinks what the church needs is to get the Spirit back. There was great deal of talk about healing; physical and otherwise. See I think Dan is a veteran in Nazarenedom, he knew what we could handle and what we couldn't. We all like to talk about the fruits of the spirit: 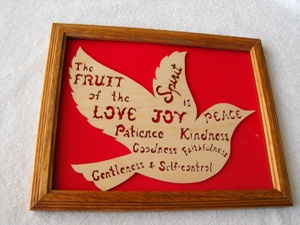 What Dan seemed to think was the problem with the church was that there is more to the spirit and it is being suppressed. He says that if the spirit is a dove then we have cut off one of it's wings and it is just flying around in a circle. The sermon ended with a great call to the stage where he asks pastors to come forward and receive God. "That language was questionable"

So if you were there, you are saying to yourself I thought you would do more than a recap. True here it is:

There was way to much negative noise generated the day of his sermon. Most of the negative noise that I was hearing was coming straight from the educational institutions and students in the denomination. There was a very interesting split however. It seemed as if Trevecca itself had been offended! Olivet and Northwestern had good things and bad things to say, and MidAmerica seemed to be much more positive. I talked with many other youth pastors that were there for the service and they were extremely touched, but most acknowledged that there were some things he said that weren't correct. What was really moving to me however, was on Wednesday. People were starting to realize that maybe they had been a little out of line with their critiques of his sermon. I saw some redemptive works happen. Although they remained steadfast in the attitude that what he was preaching was wrong, they were able to change their tone of condemnation to a tone of love and seeking to be in conversation about the topic. This was not the case for everyone that spoke out against the speaker, but there was enough of it that showed me there is hope for us to work through this as Dan Boone might suggest with a "Charitable Conversation". I listened to our discussions that I recorded about the sermon and also looked at some of the redemptive photos that I took at the Conference and decided not to post them, but just to describe them as wonderful candid moments of God's work in our lives. I did not agree with everything Dan Bohi said in the sermon, but I do believe that God is working through that message. I think the Nazarene Church is searching for it's identity and we may find it before the next general assembly!

There are a ton of awesome things to report on besides the controversial sermon from the 2nd Plenary Session. I sat in on a lecture by Tim Elmore on Generations, You may be aware that I have used Tim's video promotion of his book "Generation iY" to criticize the baby boomers view of the younger generation. I actually have a very different stand to take on this lecture you won't want to miss. I also want to make sure that I put a personal journal entry about the change that took place in my life at the conference. Stay tuned! Until next time -Just Jon
Rants about Stuff