First let me start of by explaining what NYC 2011 is. NYC is a gathering in my denomination. At this gathering over six thousand students from USA and Canada meet together for a week of worship workshops and work projects. This event takes place every 4 years and is intended to be a once in a lifetime experience for our students. This years theme is "A World Unbroken". 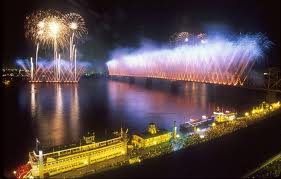 I drove up here on Monday with a few groups to help set up for our first gathering: The Southeast Regional NYI party. We were preparing for about 700 teens. Monday night we headed down to the river to eat at Joe's Crab Shack. From there we watched a great 4th of July display. It made me miss my wife quite a bit. :(  Shortly after that we headed back to the room to crash and the Galt House. 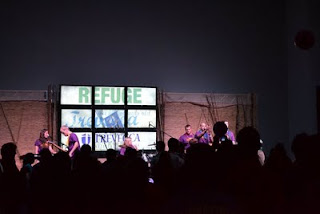 Tuesday was a great day, but it started out way to early for me! I headed to Krispy Kreme at 6 am to gather doughnuts for the groups that we brought up early to set up our party! From there we unloaded our truck and began to set up the stage, the tiki huts/candles the lights and the rest of the boring stuff that nobody ever sees that makes a party work! Props to our great South East event director and the crew that puts on such a great show every time! At 5 we loaded up by the river onto the Bell of Louisville, which is a dinner cruise ship that goes up and down the river here. The whole Tennessee district seemed to have a blast on the boat! I ate so much food, everything is a buffet!!! After the boat it was time to party! We headed back to the convention center and had our awesome Regional party.
When the party was over, which was late already, it was time to tear down the room. Ugh I had been up since before 6 am and here it was after midnight and we still had so much work to do! We pushed through it and I went and crashed right away.

Wednesday we woke up around 6:30 to grab some breakfast and head out to our work sites. My group went to three different public schools in Jefferson county and did some landscaping work. Our kids were amazing, they worked hard and got some great work done in less time than we could have imagined. The people that we were helping were so nice, they even busted out a concession stand for us and hooked us up with some free nachos lemonade and candy!!!!  Lunch got there at the end of the day and it was Chick Fila sandwiches which are awesome! We headed back to the Hotel and as you might imagine I was exhausted. So as the rest of the kids went to the pool, it was time for me to take a nap. When I woke up it was pretty much time to go to dinner. I headed down in an elevator so packed full of youth pastors and teenagers it was most definitely a fun ride! Obviously someone hit every single floor button too! We headed to a little "Sports Grill" that had some bowling alleys and games for dinner with the rest of Tennessee. Afterwords it was time to head out or the Yum Center, for the opening night! Starfield played our worship and Chris Folmsbee spoke a message. The most quoted line from his message I believe was this: The Gospel does not manage brokenness it simply unbreaks it." After the service I headed out to Taco Bell to pick up 400 tacos for our kids and headed back to the Hotel! That was an experience! The kids were in a Toby Mac concert and two of our girls got to play his guitar as he was performing! After everything was said and done last night I sat in the room with the boys talking over the service and watching some great episodes of "Storage Wars' on A&E.

Pretty good Conference so far. We have Francis Chan speaking tonight. The guy is everywhere! Hope you are able to pray for the students here this week, It isn't even halfway over yet and it feels like we have been here forever! Until next time -Just Jon
Ministry Journal Youth Stories