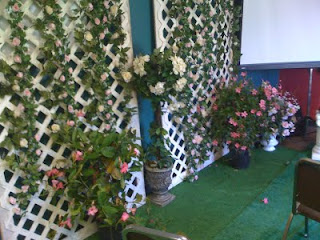 The past month I have been in a series called "To the Garden". I turned our youth room into an actual garden with real life plants and a few fountains. It even had a makeshift waterfall made of stacked television sets.

We started the series in the most obvious place which was Genesis. From there however the students were surprised to find that we had made our way out of the garden and Genesis. We took a pit stop in Ezekiel and then on to the New Testament. We found ourselves back in a garden so to speak with each lesson. The neat idea behind this was: that we are invited to be co-creators with God. This played out in two very real ways for our teenagers. First they had the opportunity to plant in our youth room some seeds. They did this the first week of the series. This obviously symbolized being a co-creator, but it had a deeper double meaning. We talked about the seeds that we as Christians are planting in other peoples' lives around us. The students watered the seeds every time they stepped foot into the youth room. After a week our seeds began to sprout, much like the minds of our young students that had been attending the series. They found in Ezekiel on the second week that even the driest places in our lives can live, through the miracles of God. It was here that I asked the students to grab a-hold of loving the people that God has put them in contact with like Jesus loves them. You see there is hope found in this love:

“‘This is what the Sovereign LORD says: On the day I cleanse you from all your sins, I will resettle your towns, and the ruins will be rebuilt. 34 The desolate land will be cultivated instead of lying desolate in the sight of all who pass through it. 35 They will say, “This land that was laid waste has become like the garden of Eden"""

The whole purpose of this series was to show them that although we live in a world that has much wrong with it, God has not left us here alone. Instead, God has given us a hope and a way to return as though we were still in the Garden of Eden.

I had a blast getting to do this garden project, and it was a lot of work. But in the end the flowers all bloomed on the plants that started the series as mere seeds in a package. Our students also bloomed like those flowers. By the end of the series their minds were opened up and their hearts were reaching out for the son..... and that's a pun....